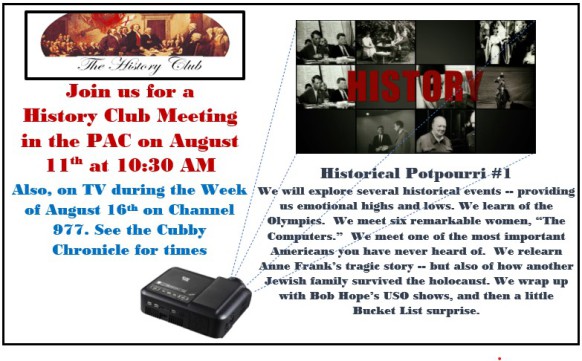 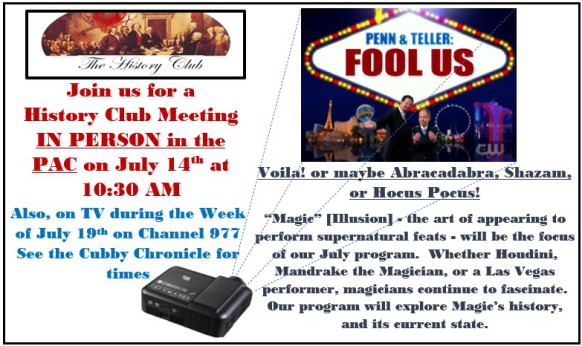 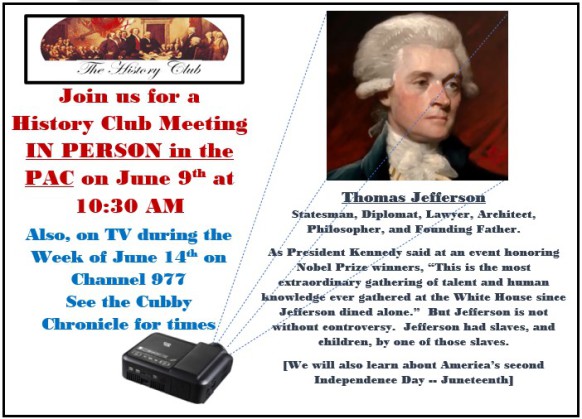 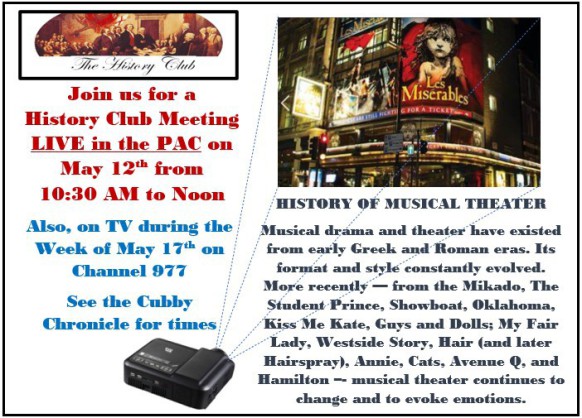 The shows are taped and run on AC TV, Channel 977 at various times during the week following the meeting - Check the back of the Cubby Chronicle for times.

Join us each month as we explore historical narratives.  We will use many different formats and sources to learn about people, places, and events which have shaped the world of today.  In the process we will be informed, intrigued, entertained – but most importantly, we will learn. 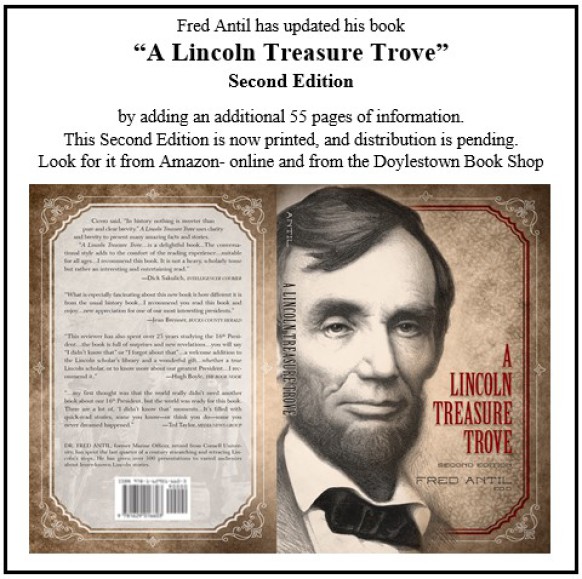 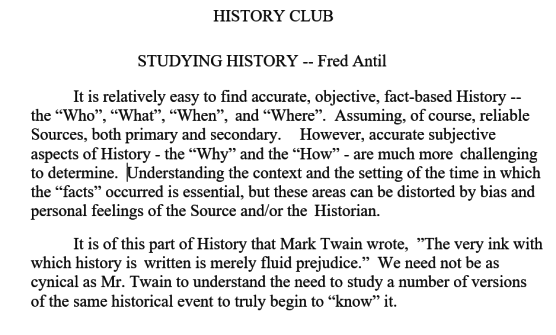 Pictured below is Fred Antil as Abraham Lincoln addressing a school class.  Read his story about Lincoln just below the picture. 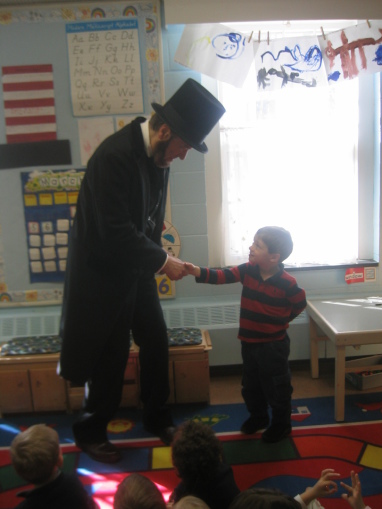 One Man’s Search for Abraham Lincoln

“…and so did Abraham Lincoln.”   Thus ended a long forgotten speech delivered by a nervous high school student in an oratorical contest decades ago.  It not only helped me win the contest -- it indicated my early interest in Lincoln.

Many years later, some twenty-five years ago, I was invited by a granddaughter to read to her class on grandparent’s day.  My Lincoln interest kicked in and I brought Lincoln books to read to the children.  Soon other grandchildren began making the same request. After a few such readings I figured that since I was about Lincoln’s size, and about as handsome, why not dress up like him and try to make it a little more real for the children.   A costume shop provided the top hat, vest, long black coat, bow tie, and fake beard.

It wasn’t long before I began to get invitations from adult audiences.   I knew that while my makeshift costume and limited Lincoln knowledge might work with the children, both had to change dramatically if I were to properly serve adult audiences.  I got an authentic period suit and hat.  I also grow, and darken, my own beard when asked to perform.  To finalize my transformation I add a prominent mole (the tip of an eraser) to my right cheek.  Once, in a fourth grade class, an excited young girl looked up and asked, ‘Can I touch your mole?”  Knowing it was my last event that day I replied, “You can do better than that, you can have it.”  I pulled if off and handed it to her.  She was startled but took it.  Later, when the class sent a thank you note she signed it, “Your friend, the mole girl.”

More important than the physical transformation, my study of Lincoln began in earnest.  I’ve accumulated an extensive Lincoln library, collecting and reading everything possible about this remarkable man.   I also have visited every place that Lincoln lived or spent much time, and many Civil War battle sites. Traveling light, but never without my journal in which I take notes, I’ve visited his two homes in Kentucky, the farm in Indiana where he spent his teen years, New Salem, Illinois, where he spent his twenties, and Springfield, Ill., where he spent much of his adult life.  Visiting his home, his third law office, the Legislative building in which he served, the Depot where he gave his farewell on his departure for DC, the family burial site, and, of course, the wonderful Lincoln Museum, make Springfield a Lincoln treasure trove.  But no study of Lincoln would be complete without a visit to Washington, DC.  The White House, the Soldiers’ Home where the family spent summers, the Ford Theater where he was shot, and the Peterson Boarding House where he died, are moving and memorable.   Also unforgettable is the Lincoln Monument, a fitting tribute to an outstanding man.

While my focus was on Lincoln I also try to learn as much about the Civil War as possible.   Visits to Fort Sumter, SC, where it started, and to Appomattox, VA where it essentially ended, and many of the major battlefields in between, Manassas, Chancellorsville, Fredericksburg, Petersburg, Atlanta, Richmond, Antietam, Shiloh, Gettysburg, Vicksburg, Fort Donelson, New Orleans, and Nashville, provided graphic reminders of the bloody and terrible price paid to preserve the Union.

I tailor each talk to the audience I will be addressing so am constantly researching different aspects of Lincoln history to meet the interest of each particular audience.

At one Lincoln Day dinner in upstate NY I was to introduce the main speaker, New York City Mayor Rudy Giuliani.   I said, “Mr. Mayor, you represent one of my favorite cities.  My hero, George Washington, was sworn into office and gave his farewell address there.  That makes your city special for me, but in addition I once gave a speech there that some say won me the election.  Tell me sir, is the Cooper Institute still there?”  Looking up at me he bellowed, “Mr. President, it is not only still there but I was there last week and they still talk about your speech!”

When invited to introduce the main speaker at a major Cornell University event I was asked, “You only have five minutes, is that sufficient?”   I replied, “I gave the Gettysburg Address in under three minutes, I can do wonders in five minutes.”

One of my most moving moments as Lincoln came after a presentation to a class in Andover, Mass.  The day after my presentation I got a call from the teacher telling me of a tearful call she had received from a student’s mother.  It seems her daughter suffered from what is called selective mutism, though she could speak, she chose not to.  That afternoon this young girl went home clutching my “calling card", her penny, and wouldn’t stop talking about meeting Mr. Lincoln.  Her mother was ecstatic.

After giving many hundreds of Lincoln presentations I only can say that the more I learn about Abraham Lincoln the more I realize how lucky this country was to have had him as its leader.  Because, as Edwin Stanton reportedly said, “Now he belongs to the ages.”