Executive Director Joe LoCascio set the tone for our fifth year with his front page essay in the January-February Annagram. It included this advice (author unknown):

“This year in 2007, mend a quarrel. Seek out a
forgotten friend.

Give a soft answer. Encourage youth. Keep a promise.

Apologize if you were wrong.

Think first of someone else. Be kind and gentle.

Express your gratitude. Gladden the heart of a child.

Take pleasure in the beauty and wonder of
the earth.

Speak your love. Speak it again. Speak it still once again.”

2007 saw significant growth in our community with the opening of our third neighborhood. In May we welcomed new residents to Magnolia Landing. Bayberry Grove opened later in the summer and Ivy Glen followed in the fall.

Our Administration set out to conquer one of the persistent problems of campus life - a shortage of parking! In March, a Town Hall meeting was held to inform residents of the possibilities for added parking on campus. With approvals pending from our township, we were only months away from more spaces for residents and guests.

The Wellness Center offered some interesting programs in January: a “Balance Awareness Day” gave residents an opportunity to have their balance ability tested and evaluated. A program about acupuncture was presented by Dr. Robin Wallace. In the summer, billiards, bridge and bocce were some of the choices during the Ann’s Choice Olympics.

Residents and staff joined for an exotic evening of Middle Eastern dancing in the Performing Arts Center, a project led by Resident Life Director Diane Lasichak. Twenty-two participants presented dance forms from Greece, Lebanon, Turkey, Egypt, and Morocco in a program titled “Casablanca Under the Stars.”

“Take Your Kids to Work Day” gave our employees’ children an opportunity to find out what their parents actually do here all day.

Renaissance Gardens opened in April, a major step toward providing full continuing care on campus. We “oohed”and “aahed” as we toured the bright and airy 132-bed skilled nursing and assisted living facility, while Rhett, the canine member of the staff, watched for “falling snacks” from the refreshment table.

Rhett, a Golden Retriever-Labrador mix, came to campus by way of Mary and Ken Longman, long-time puppy raisers for Canine Companions for Independence. Rhett took up residence about a year after the Longmans had moved to Ann’s Choice; he was to be their sixth and final CCI puppy. 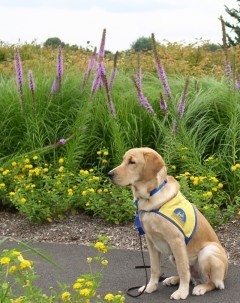 Mary and Ken provided the basic training and socialization for the furry beige bundle of energy, taking him around campus to events, acclimating him to the shuttle and the elevators, and teaching him the good manners of a Canine Companion. Alas, when Rhett went on to CCI “graduate school,” he was unable to complete the requirements. Lucky for us, consideration had already been given to having Rhett return should he not graduate, and Rhett joined the staff as the Renaissance Gardens companion dog. Currently, Rhett lives with one of the RG staff and comes to “work” each day, but goes home at night and on the weekends and has a regular doggie life. He’s a great ambassador for RG and never fails to bring smiles to the faces of visitors, residents, and staff.

Voting became easier for our residents. Starting with the May primary, we said “Goodbye!” to those often cold, wet, and windy waits outside of McDonald Elementary school and “Hello!” to our new District 14 polling place in the Keystone Multi-purpose Room, thanks to the persistence of our RAC members. In 2007, RAC consisted of Bob Franz, Bob Swan, Gerry Connell, Sy Glazman, Alan Rogers, Glenn White, Grace Reeves, Harriet Malamud, and Jean Pavela.

Also new on campus was the “Unity in the Community” initiative developed by Social Work Manager Suzanne Tepper. A committee of residents worked with staff to stage events (and later community forums) to bring the community together for fun and to address common issues. One of the first projects taken on by the Unity committee was an Ann’s Choice Alma Mater. The winning song was written by Margaret Braunschweiger of Braxton Court and is sung to the tune of Home on the Range. It goes as follows:

I’ve found me a home where the old people roam and where laughter and friendships abide.

Ann’s Choice is the place, t’was an old naval base, and that’s why we sing this with pride (Chorus).

We’ve begun life anew with the time to pursue all things that have been set aside.

We have memories to share with our new friends who care and we now wear our ages with pride (Chorus).

And when life’s end draws near, there is nothing to fear, for we’ve not had to walk on alone. Ann’s Choice is the best, above all the rest, the happiest home that I’ve known (Chorus).

(Chorus): Home, home at Ann’s Choice. When we drive through the gates we rejoice. We sit back and unwind and enjoy peace of mind and together we join with one voice.

Our Security Department introduced the “Swiftreach” emergency notification service in April, enabling Security to place hundreds of calls to residents within minutes when a campus emergency arose.

Arcadia University’s Community Scholars program came to Ann’s Choice with special courses that ran the gamut from Victoriana to the goddesses of the silver screen.

The Regional Board of Directors visited on May 18 and held a Town Hall to review the 2006 annual report [see the 2006 history section for more information about the contents of that report]. Also in May, the annual Scholars Fund awards ceremony was held in our Performing Arts Center, with 30 student employees receiving scholarships. Scholars Fund committee member Andy Christmas was the keynote speaker.

Under the guidance of Pastoral Ministries Manager Rich Haddon, a resident committee was formed to develop designs for the round stained glass window that would be a feature of the new chapel. The Interfaith Council was also busy preparing for the opening of the chapel. Pastoral Ministries joined forces with our Social Work Department to initiate a special 8-week program series, “Journey Through Loss and Grief,” which supplemented our regular bereavement group meetings. That series continues to be offered each fall to help those who are mourning the loss of a loved one. 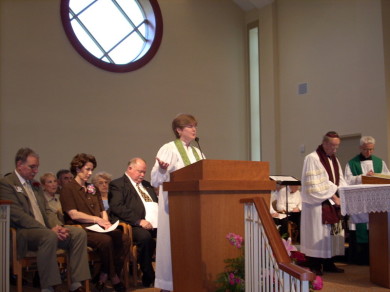 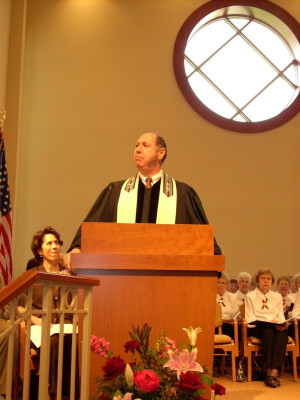 June was full of fun, thanks in part to the fourth Benevolent Care Fund gala, which raised over $204,000. The theme was “Around the World in 80 Days.” The gala was held for the first time in the new Keystone Clubhouse Multi-purpose Room. Always generous to community groups, Abington Bank presented a check for $16,000 for the BCF.

Those hardworking folks in our Grounds Department designed and planted a beautiful little English-style garden outside of Braxton Court. They walked away with several Bucks Beautiful awards, a tribute to our team’s continuing efforts to create one of the most attractive places in Warminster.

New staff in 2007 included Chris Donati, who came on board through Erickson’s Executive Development Program. Dr. Cynthia Shepard joined the Medical Center. Our own Debbie Kurtz (Dining Services manager) and Marie Dmoch (retirement counselor) were two of 34 employees from 17 campuses honored with the “Best of the Best” Award from Erickson corporate. Debbie was named our “Employee of the Year” and Marie received the leadership award. Susan Abtouche was promoted to director of philanthropy. She had joined the staff in 2005 as gift planning coordinator.
Various departmental directors served on off-campus community boards, including Tom Walsh (Regional Finance Director – Lenape Valley Baseball Board); Deborah Olcese (Marketing and Sales Director – member of the NGA and Twilight Foundation Boards); and Chris Babst (Dining Services Director – Bucks County Community College Occupational Advisory Committee). We ended 2007 with a total work force of 713, 372 of whom were new employees. Erickson Retirement Communities made Fortune magazine’s “100 Best Companies to Work For” in 2008.

In July, Mark Erickson (one of John Erickson’s sons and a leader in the corporation) shared his energy, vision, and enthusiasm at a Town Hall meeting.
By the end of the summer we saw the beginning of site preparation for our last neighborhood. The Warminster Township Board of Supervisors approved the development of the final phase of our community, 496 apartment homes and a fourth clubhouse.

In the fall, life cycle renovations began in the Village Clubhouse.
New upholstery, window treatments, wallpaper, paint, and carpet spruced
up the lobby, dining rooms, and lounges. By September, the monthly
calendar had grown to booklet-size. A sample of activities in that month alone included Sunday Night Movies (sponsored by the Ann’s Choice Garden Club); a special production of My Favorite Year by the Jenkintown Music Theatre; a piano concert by resident Doris Coleman; a “Men of Harmony” concert;
a Hoedown sponsored by the Unity in the Community committee; a scarecrow
building contest; the 7th annual Erickson Walking Challenge; a Red Cross blood drive; and a Musicians and Friends concert. Residents had an opportunity to “Meet the Candidates”at forums held in the PAC prior to the general election, and Representative Patrick Murphy was interviewed for The Arnold Yeadon Show (a Channel 5 production) about his experiences as a first-year Congressman.

Events throughout the year kept residents involved and entertained, including a production of Gian-Carlo Menotti’sAmahl and the Night Visitors by the Delaware Valley Opera Company; a special evening of music, poetry and photographs of African American art and sculpture; young violinists in concert sponsored by the Ann’s Choice Entertainment Committee; and a concert featuring our own Joe LoCascio (and friends) titled “An Evening with Joey.” Sit and Stitch continued to create beautiful handmade items that they sold to benefit our funds. 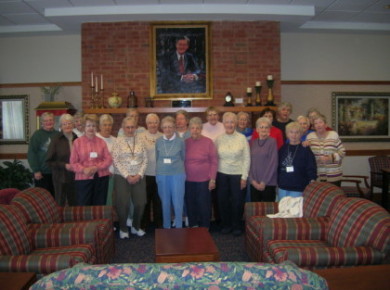 Olney High School grads – numbering nearly 80 strong – found one another on campus, formed a club, and took on a project to help support the
school’s library.

A blessing of our pets was held at the gazebo on October 4 and a Veterans Day recognition ceremony was held on November 12.

Community memorial services took place on March 6 and September 25 to remember 57 residents who had passed away.

November’s Health Fair, sponsored by the Wellness Department, gave some of our doctors, therapists, and fitness providers an opportunity to meet informally with residents. Massages were enjoyed by many, courtesy of
the Liberty Commons Salon.

By the end of the year we had settled 284 homes, bringing our total resident count to 1,655. The annual resident satisfaction survey showed that 96% of our residents would recommend Ann’s Choice to others! 2007
accomplishments included the installation of an “assistive listening” program,
implemented by General Services; the devices help residents to hear better in
multiple locations across campus including the PAC and the Chapel. In addition to supporting the Benevolent Care Fund, residents and staff aided the Scholars Fund by raising $111,723. And $253,233 was donated to the Staff
Appreciation Fund. The annual Turkey Trot raised $600 for a local food pantry; and toys, clothing, and food were collected for Christ’s Home Orphanage. There were 98 active clubs to choose from. Fifteen special entertainment events were orchestrated by the Entertainment committee.

The Trips and Travel Club organized 50 trips. We joined together at the end of December for a special Winter Reflections concert presented by the Ann’s Choice Chorus. Their enthusiastic version of Irving Berlin’s Happy Holidays closed the concert and helped to get us in the holiday spirit as we looked forward to 2008 and another great year at Ann’s Choice.