A cane or walker may help you feel more stable when you walk. Different types of canes are available. Some have grips made of foam or that fit the shape of your hand. Many canes can be adjusted, but some cannot.

If you're at risk of falling, your physical therapist might suggest using a walker. A walker will help you stay balanced by giving you a wide base of support. Be sure to choose a walker that fits you and gives a level of stability that is best for you.

Different types of walkers are available. Some walkers have two wheels so the walker shouldn't roll away from you. These walkers work well if you need to put weight on the walker when you move. Other walkers have four wheels and brakes for going down inclines.

You can add a basket, tray, or pouch to some walkers to carry items. These accessories will make it more convenient to use the walker.

If you use a walker, be sure it's the right type for you. Also, learn to use it properly. A physical therapist can help you select the right walker and show you how to use it. Four-wheeled walkers can be used if you don't need to put your weight on the walker for balance. Those with two tips and two wheels can roll, depending on where you place your weight. Walkers with tips only are quite common and will not roll.

A reacher, or grabber, can also help prevent falls. This simple tool lets you take lightweight items from high shelves and other places and pick up objects from the floor so you do not have to bend over. Use a reacher rather than standing on a stool to get something from above or bending down to pick up something from the floor.

Another helpful device is a portable telephone. Carry the phone with you from room to room. When it rings, you won't have to rush to answer it. Not rushing could avert a harmful fall. Never rush to answer the phone or door 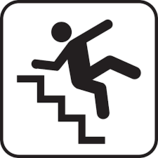 Click on the little picture here to link to some short videos about FALLS in your home.

When you get to the page with the videos, you can scroll to other videos of interest.

A CHECKLIST FOR PREVENTING FALLS IN YOUR HOME

Make sure all handrails are not broken and are securely fastened.

Both sides of the steps should have handrails.

Make sure all floor boards are even and rugs, including area rugs, are secured to the floor with tacks, non-skid pads or double-sided tape.

Be sure that you can move safely in bathroom area, and in and out of the tub or shower.

Remove soap build-up in tub or shower on a regular basis.

Install adjustable height shower heads.  Mount grab bars at the toilet, bath and shower on walls with secure reinforcements, to prevent the bars from coming loose.

Items that you use frequently, such as dishes and food items, should be easy to reach.

If you have to use a step stool, make sure that it has a bar at the top to hold on to.

Install light switches at the top and bottom of stairs.

Place a lamp (and telephone) near your bed.

Keep lighting uniform in each room and add lighting to dark spaces.

OTHER ESSENTIAL STEPS FOR PROTECTING YOURSELF AGAINST FALLS

Assessing your home to identify fall hazards and making the necessary changes to prevent them are significant steps. It’s also very important to:

Be sure to have your eyes checked every year. Vision problems can cause falls.

Check with your physician about the physical activity and exercise appropriate for you. Stay as physically active as you can. Exercise helps to prevent falls, especially activities that enhance balance and coordination.

Be careful in choosing shoes as they can cause you to trip. The soles should be non-slip and not too thick.

The number of American seniors who die from fall-related injuries has nearly doubled since 2000, a new report from the U.S. Centers for Disease Control and Prevention reveals.

The observation is based on an analysis of death rate information compiled by the National Vital Statistics System between 2000 and 2013. The report specifically noted that while roughly 30 seniors in every 100,000 died following a fall in 2000, that figure jumped to nearly 57 per 100,000 by 2013.

Investigators also implicated falling as the cause of death in more than half (55 percent) of the roughly 90,000 unintentional injury fatalities involving seniors in 2012 and 2013.

Reacting to the findings, Dr. Lauren Gleason, a geriatrics medicine fellow at Beth Israel Deaconess Medical Center in Boston, said that it's important to recognize that deaths resulting from a fall "are not usually just about the fall."

"Senior falls are a signal event," she said. "And they're often part of a larger geriatric syndrome, which means the fall itself may represent other things that have long been going on. So the fall event can certainly lead to a decline in functional ability and even death. But that can also result from medical problems that cause the fall in the first place."

The findings were published May 6 in the CDC's NCHS Data Brief.

Gleason (who was not part of the CDC report team) said that there are multiple factors that might contribute to a person's risk for falling, such as balance issues, poor nutrition, poorly controlled diabetes resulting in foot numbness, or poor coordination. Impaired thinking, she added, could also render familiar environments unfamiliar, raising the risk for tripping.

About one-third of Americans over 65 fall every year, according to the CDC. Emergency departments treat about 2.5 million fall-related injuries (or about one every 13 seconds) every year.

Apart from its focus on falling risk, the CDC report also found that car accidents are now responsible for 6,000 senior deaths per year. That's 14 percent of all unintentional injury deaths among those 65 and up.

Car accidents are followed by death by suffocation (8 percent), accidental poisoning (4 percent), and death by fire (2 percent). While many unintentional causes of death experienced a bit of an overall decline since 2000, the risk of dying from many of these factors tends to go up as seniors get older.

For example, seniors 85 and up appear eight times more likely to die from suffocation than those between 65 and 74. Octogenarians were also twice as likely to die in a fire as those aged 65 to 74.

Similarly, seniors 85 and up were almost twice as likely to die in a car crash than those aged 65 to 74, the findings showed.

Deaths resulting from accidental injuries now make up 85 percent of all injury-related deaths among American seniors, according to the CDC researchers. In the report, one in 10 unintentional injury deaths were due to a cause that was deemed "unspecified."

Death resulting from suicide is by far the most common intentional injury among today's seniors (13 percent), followed by homicide (2 percent), the study found.

On a positive note, Nancy Gell, an assistant professor in the department of rehabilitation and movement science at the University of Vermont in Burlington, stressed that "while falls may be the leading cause of death by unintentional injury, that does not mean that most falls result in death."

And, Gell said, "an important takeaway from this study is the concerted need for fall-prevention efforts. [This] may include an individual fall-risk assessment, home environment assessment, and participation in fall-prevention exercise, such as balance and strengthening exercise."

Questions or comments about this page,  contact Bob Klimek by using the Contact Us page at the top.